"Do they know it is summer...In Africa" 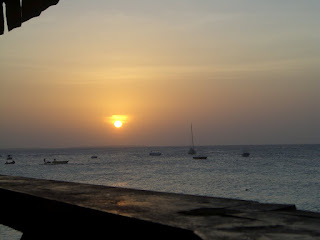 Dear pale and chopped-skin fellow humans in winterland, we have been following the news of this serious situation you are in and we have decided to extend a hand from a land called “Africa”.

The sun is so bright here you won’t survive without a smile, sunglasses and a chilled glass of rose by the sea. We hear u guys have to wear miserable grey suits to work in inhuman conditions, we can’t imagine what a winter + grey suit does to your spirits, poor things. But not to worry, we will do all we can to help you free yourselves of this misery. We are organising a charity concert: "Do they know it is summer…In Africa" and we are sure we can raise enough sun and warmth to cure your depression, miserable grey suits and pale skin.

Lots of sunshine and warmth from Africa.
Posted by Unknown at 11:17 AM No comments:

First honest piece I have read about the endless Somali conferences on peace.


If I were a Somali I would thank Allah for the pirates. For more than 20years the world has stood by while successive civil wars destroyed thecountry, killing hundreds of thousands of people by bullets, disease andstarvation and reducing what was once a prosperous land to a war zone.

Butthe seizure of more than 200 ships by kids with guns in small craft haschanged all that.Britain, for whom shipping and trade around the Red Sea and the Gulf arevital national interests, has decided to take action. Pirates, thegovernment has realised, cannot be stopped as long as their land bases arenot ruled by a government. But on land the government is under attack fromIslamic fundamentalists who are recruiting and training terrorists. So a political solution must now be found for Somalia. So declared WilliamHague, the Foreign Secretary, clad in flack jacket and helmet, in Mogadishulast Thursday.

The search will begin at a conference in London on February23rd. At last.And what a conference it will be. Some 40 heads of government have been invited to Lancaster House. This was where traditionally former Britishterritories negotiated their independence, but in a curious irony ofhistory, this conference will instead discuss the take-over of Somalia. At least that is what the Italians, the former rulers of southern Somalia,want.

Somalia has been at war since the late 1980s when rebel movements foughtthe government of Siad Barre. He fled, but then they fell out with eachother and the country broke up. The North West, the old British-ruledSomaliland, re-established that state and declared independence. The rest of the north, Puntland, is also relatively peaceful and rules itself butawaits the re-establishment of a Somali state. So does some of the centre. But in the south and the capital, Mogadishu, there have been only twoperiods of peace. One followed the American invasion in 1992 after thefirst famine. But after losing 18 members of special forces - the BlackhawkDown incident - President Bill Clinton pulled out the US force and stopped supporting UN peacekeeping there. Somalia was left to stew.

The second peace period was a few months in 2006 when a united massuprising threw out the warlords and their rapacious armies. Governance wastaken over by local Islamic courts which gradually formed themselves intothe Islamic Courts Union. For a few months people were able to walk thestreets safely. Peace reigned and trade and investment began to flow. But with US support, the Ethiopians, who have no interest in a strong united Somalia, invaded, broke up the courts and installed a warlord as president.The wars resumed.

The cost of neglect has been immense. According to a recent report from theCenter for American Progress, a Washington think tank, the death toll fromthe wars is between 450,000 and 1.5 million and some 2 million displaced.The accumulative cost of Somalia's collapse has been more than $55 billion,including $22 billion from piracy. $13 billion has been spent onhumanitarian aid which is almost matched by the estimated amount Somalisoutside the country send back in remittances.

After the Ethiopians were forced to withdraw, the world handed Somalia overto Africa. Never has the phrase "African solutions to African problems"been used so cynically. Ugandan and Burundian troops under an African Unionflag, died protecting a few square kilometres of Mogadishu in the pretencethere was a government there to protect. There wasn't.

The so-called government lives in luxury hotels and apartments in Nairobi. According to a recent audit of the Somali government in 2009 - 10, 96% - yes Ninety Sixper cent! - of direct bilateral assistance disappeared, presumably stolen by corrupt politicians and officials. An official report by the UN Monitoring Group said: "The endemic corruptionof the leadership of the Transitional Federal institutions... is the greatest impediment to the emergence of a cohesive transitional authority and effective state institutions."

But it is these people who will becoming to Lancaster House on February 23rd. At the same time we know thatin much of Somalia there are very strong civil society organisations led byhighly respected men and women. They however will not be invited.

So perhaps the first thing this great conference should do is apologise tothe people of Somalia for ignoring their plight for so long. The second isto usher Somalia's professional politicians into the garden or off to smarthotels and bring in some Somalis who really represent the interests of thecountry and its long-suffering people.Richard Dowden is Director of the Royal African Society.
Posted by Unknown at 7:58 AM 1 comment:

I lost my bag on Friday and realised an hour after leaving Junction that I had left it in the ladies! Asked the taxi driver to turn around and while we were driving I mentally prepared myself for the worst and started thinking of what I could live without. I had my purse with almost no money, camera with so many pics but could live without, few ID cards with inconsistently spelled names that are incriminating, health insurance card, make-up (am trying to do the lady thing) and my beloved tweezers...I would chase someone to hell and back for these. I bought them from the Body Shop about 5 years ago and have had them in my bag ever since, I take them with me everywhere. They come handy, they are tiny, do a great job and come in cute case. I don't do much of beautifying but I believe in basic maintenance, like no old-Arab-man-look eyebrows and few hairs sticking out of my chin! I tend to rub my chin when talking or thinking and sometimes in the middle of a date, I feel a hair sticking out of my chin, eff...I excuse myself and go to the ladies with my emergency kit and pluck the annoying thing and all is well again. People come and go, I move coutries and change jobs, but my tweezers are loyal and I couldn't imagine life without them.

While driving back to Junction in the mad Nairobi rush hour traffic, I got a call from a colleague
with the message that a lady found my bag and has taken the trouble to call 3 people before finding my colleague using her Tanzanian number! Imagine that? This city famous for both violent mugging and petty theft and my bag lying in a public toilet for nearly an hour before someone took the trouble to track me down. I met her, an English lady working for Save the Children in Dar with her Tanzanian partner and their 2 kids. Gave her a big hug and offered to buy them drinks but they were in a hurry. I will meet them in Dar or Nairobi one day and we will have a drink, the least I could do to thank them for their kindness.
Posted by Unknown at 12:57 AM No comments: